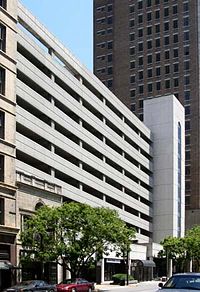 In June 2005 the City of Birmingham made an agreement with Synergy Realty Services, redeveloper of the City Federal Building, to make 153 spaces available for condominium residents. The deck also serves the Frank Nelson Building, with parking passes for Birmingham School of Law students at a special rate per semester.