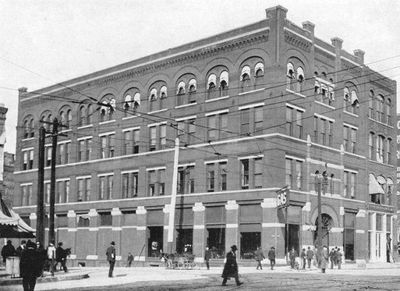 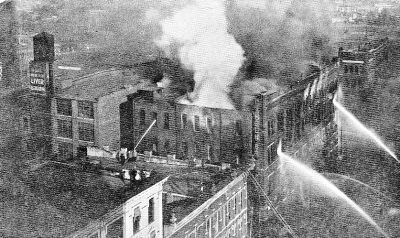 The 1914 fire at the Birmingham Railway, Light & Power Building

The building was originally three bays wide and ten bays deep with engaged piers between each bay. The ground floor had large plate-glass openings between the piers at the front, and brick infill panels where no windows were needed at the back. On the second and third floors there were pairs of windows, joined by continuous limestone sills. On the fourth floor the windows were topped with round arches, with a larger brick arch surmounting each pair below a tall projecting brick cornice. The central bay on the front facade was slightly wider, with a Romanesque arch over the entryway (echoing the entrance to the Steiner Building across the street). The central bay was flanked with engaged colonettes, and featured triple windows instead of pairs on the upper floors.

Part of the ground floor of the building was used as a public showroom for gas-powered and electric appliances and equipment. Before 1908 an addition was made to the east side of the building, expanding it to four bays.

The Birmingham Railway, Light & Power Building was destroyed in a fire on May 8, 1914. Two people died in the fire. A new 7-story building for BRL&P Co. was constructed on the same site in 1915.