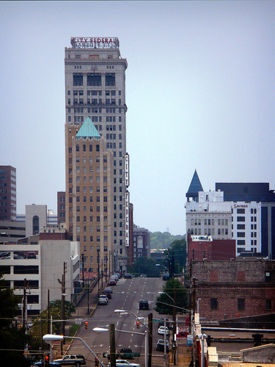 Richard Arrington Jr Boulevard is the name given to a stretch of streets through Birmingham from Vulcan Park on Red Mountain to the Forest Hill Cemetery in Woodlawn. The name was applied by the Birmingham City Council to honor Mayor Richard Arrington, Jr at the time of his retirement in 1999.

Councilman Aldrich Gunn entered the resolution to dedicate a route which included parts of three other streets in honor of Arrington on July 13, 1999. It passed in that meeting and a mocked-up street sign was unveiled later the same afternoon at a ceremony in Patton Park.

In the Summer of 2000 the city submitted the name change to the United States Postal Service, which gave property owners along the route 6 months to notify correspondents before their forwarding order would expire and mail to the former addresses would be returned to sender.

Numerous businesses effected by the change petitioned the Council to consider making the change honorary, with dual signage (similar to 8th Avenue South/University Boulevard). Councilors Gunn and Sandra Little refused to compromise, casting aspersions of racism against the objectors. The conflict escalated to the point where organized pickets were directed against some businesses who had protested the change. The May 8, 2001 Council meeting was suspended so that Councilors could join a motorcade protesting the businesses' request.

Sixteen businesses filed a lawsuit claiming that the change was made without required public notice, without public hearings or due process and citing damages totaling over $400,000 for new stationery, signage, marketing materials, communication with correspondents and re-filing of paperwork. The issue dragged on, with the businesses continuing to petition the Council, which set aside numerous agenda items to settle the issue. Ultimately the businesses dropped the lawsuit after reaching an agreement with the postal service to continue delivering mail to their old addresses.

Note: for addresses along the route, see the individual articles linked below.