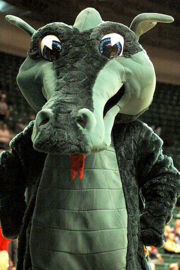 Blaze or Blaze the Dragon is the official costumed mascot for the UAB Blazers athletic teams.

Blaze was introduced as a costumed mascot on January 6, 1996 during a basketball game at the UAB Arena. The concept of using a green and gold dragon to represent the "Blazers" team name was developed as part of the re-branding of UAB's athletic teams during the football team's move to NCAA Division 1-A. The dragon logo was revealed on October 18, 1995.

Previous Blazer mascots included an unnamed furry pink dragon (1978); Beauregard T. Rooster (1979-1992); a costumed chicken which owners of the San Diego Chicken's trade mark claimed to be infringing on their rights; and Blaze the Viking (1993), a short-lived costumed warrior which often frightened children.

The Blaze costume weighs 35 pounds, including a 10-pound head. Students are selected by audition to be "Blaze handlers" at sporting events and public appearances. During football games, a different handler appears in each quarter. Four handlers each year are eligible for cheerleading scholarships, a stipend and travel expenses.

A 16-foot long "smoke-breathing" statue of Blaze was erected in April 2008 on the Bartow Arena Plaza. In 2003 it was discovered that water seepage had compromised the structural integrity of the concrete statue. In summer of that year it was removed for fear of collapse and replaced by a fiberglass version in 2014.

Another public sculpture, entitled "Blaze Means Business", was dedicated in Blazer Pride Plaza, adjacent to the UAB Collat School of Business building at University Boulevard and 13th Street South in 2018.