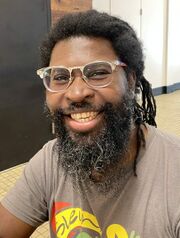 Brian Duane "Voice Porter" Hawkins (born c. 1979; died August 25, 2021) was the founder of Ensley Alive and The Color Project Ensley and the much-loved host of "Bards & Brews" at the Birmingham Public Library.

Hawkins grew up in Wylam and graduated from Ensley High School. He and his cousin Sherman Benton were leaders in a mural campaign organized by the Birmingham Museum of Art at local schools. One notable mural, honoring a teacher who had died, was completed at Lee Elementary School.

Hawkins enrolled at Mississippi State University and studied poetry while completing a bachelor's degree in civil engineering in 2001. He began performing poetry as "AFreeVoice", often at "Phat Tuesdays" at the High Note Lounge. He later shortened his stage name to "The Voice" and "Voice", and then to "Voice Porter". He led open mics at Carver Theater, Safari Cup and Java and Jams before Bards & Brews launched in 2009.

Hawkins was a former president of Norwood Learning Gardens and vice-president of We Are Rtists (W.A.R.) which promotes collaborative projects and business skills for artists. The group launched the Ensley Jazz House "Jazz House Poetry" series in 2016. Hawkins also worked to put together a Sun Rise event honoring jazz composer and bandleader Sun Ra. He worked most days from the Starbucks Coffee location at Five Points West.

Hawkins was awarded a "Game Changer Spear Award" during the 2018 Vulcans Community Awards. In 2019 he was recruited to participate in Starbucks' "Upstanders" storytelling campaign. A video of him reciting his poem "To Be Human" was played prior to CEO Kevin Johnson's keynote address at the Starbucks Leadership Experience conference in Chicago, Illinois. He completed his first book of poetry in 2021.

Hawkins was found dead at his home in Warrior in August 2021.