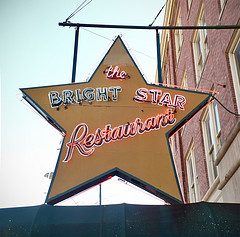 The Bright Star Restaurant is a 345-seat white tablecloth restaurant, specializing in seafood, which is located at 304 19th Street North in the Realty Building in downtown Bessemer. The house specialties include a Greek-style broiled snapper, lobster and crabmeat au gratin, Greek-style beef tenderloin, and spanakopita. The restaurant is owned currently by Nicky Koikos, who operated it with his brother Jimmy until his death in 2019. The executive chef and partner in the business is Andreas Anastassakis, a second cousin of the Koikoses. 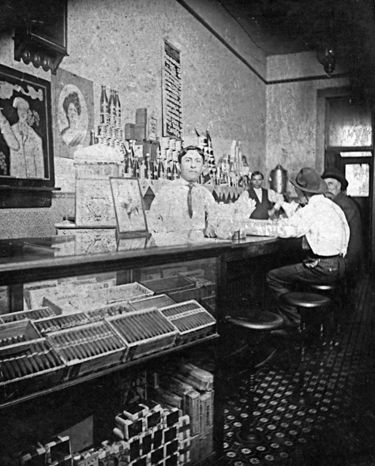 The Bright Star is often called the oldest continuously-operating restaurant in Alabama (although the Golden Rule BBQ in Irondale traces its history to 1891). It was founded by Greek immigrant Tom Bonduris in downtown Birmingham in the early 20th century, but did not succeed. In May 1907 he relocated to Bessemer with a new 35-seat cafe. It was moved three times before settling in its present location, where it has been since 1915. The dining room featured ceiling fans, tiled floors, and mirrored and marbled walls. A small group of privately-curtained booths were constructed in the back. A series of hand-painted murals were contributed by itinerant artist soon after the restaurant reopened in 1915. In its early years the restaurant served a cheap working man's menu of chili, sandwiches and soup to around-the-clock customers who worked different shifts in the mining and manufacturing communities around Bessemer.

Part interest in the business was purchased in 1925 by Bonduris' grand-nephews Bill and Pete Koikos who had come to Bessemer from Greece two years before. Fresh snapper was added to the menu in the 1930s as seafood from the Gulf Coast became available to the Birmingham market. Bill Koikos began serving fried snapper throats, which before had been thrown out, as a lunch special. The dish has since become a favorite, and was named one of "100 Things You Simply Must Eat Before You Die," by Garden & Gun magazine in 2015. The restaurant's landmark star-shaped neon sign was installed in 1941.

In the mid-1980s the Koikoses learned that Wallace Boothby, the building's owner, was about to complete a sale. Jimmy Koikos negotiated for the right to first refusal and they purchased the property, adding an elevator and renovating the lobby. They expanded with the "Dixie" and "Green" dining rooms in former ground-floor tenant spaces in 1985.

In the late 1980s Jimmy Koikos began inviting Jamie Shannon, executive chef at Commander's Palace in New Orleans, to headline an annual "Taste of New Orleans" event at the Bright Star. That event continued after Shannon's death in 2001 with his successor, Tory McPhail.

From 1991 to 1998 the Koikos brothers also owned the Merritt House on Highland Avenue in Birmingham. Other head chefs have included Ross Daidone and Austin Davis. Long-time cooks Walter Hoskins, Tony Fagans, and "fish chef" Carl Thomas are anchors of the restaurants 70-strong crew. In 2001 the restaurant added a bar.

Andreas Anastassakis was invited to relocated from Toronto, Canada to take over the kitchen and become a partner in February 2010. That same year the James Beard Foundation recognized the Bright Star Restaurant as an "American Classic". In 2017 Anastassakis launched a catering division.

The Bright Star was named "Alabama Restaurant of the Year" by the Alabama Restaurant Association for 2011-2012. In 2014 the restaurant commissioned a professional cleaning and conservation of the dining room murals which had darkened significantly over the years.