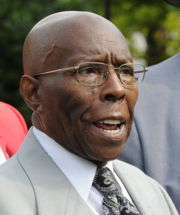 Woods was the son of Abraham and Maggie Rosa Lee Wallace Woods. He and his older brother Abraham Jr grew up in Birmingham. He attended Parker High School where he learned shoe making and tailoring and also studied public speaking. He graduated in 1950 and earned a partial scholarship to Miles College. He also attended the Universal Baptist Institute, the Universal Baptist Seminary and the Birmingham-Easonian Baptist Bible College. He accepted the pulpit of East End Baptist in 1960.

During the Civil Rights Movement, Woods and his brother both supported the work of Fred Shuttlesworth to challenge segregation with direct, nonviolent protest. He was arrested and beaten during the ACMHR's attempts to desegregate Birmingham buses in December 1956. He was arrested again while marching on the streets during the Birmingham Campaign. He was a participant in the March on Washington for Jobs and Freedom that August and in voter rights actions lead by Edward Gardner in 1965. He also planned strategy for public protests following the shooting of five African Americans who had been protesting at a supermarket that year.

Woods succeeded his brother as president of Birmingham's SCLC chapter in 2006. He has spoken out against violence and against a Supreme Court decision rendering parts of the Voting Rights Act of 1965 unenforceable.

A historical marker recognizing Woods' contributions to the Civil Rights Movement was installed at Kelly Ingram Park in September 2014.