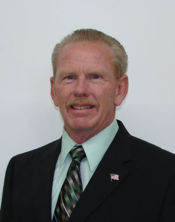 Charles Webster (born April 28, 1954 in Birmingham) is a brick mason, salesman, and the current Mayor of Clay.

Webster is a native of Chalkville and graduated from Hewitt-Trussville High School in 1972. He studied and taught brick masonry at Alabama Builders and Contractors Association and was later superintendent. He then went into block sales, and is currently a sales manager. He was elected to the Clay City Council in 2008, and ran for mayor in 2012, defeating one-term mayor Ed McGuffie with 61% of the vote.

In February 2014, Webster began a masonry program for students at Clay-Chalkville High School, taking the students to an eight-week class at International Masonry Institute in Woodlawn, where the students learn how to lay brick, weld, set tile and other trades.

Webster and his wife Carolyn have two sons, Scott and Timothy.