This article is about the congressional and campaign staffer and political candidate. For others with the same name, see Chris Davis (disambiguation). 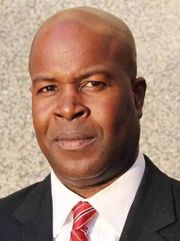 Chris Davis is director of business development for the Birmingham Law Group, a community volunteer, a former congressional staffer, and a candidate for several public offices.

Davis is the son of educator and former State Representative Pat Davis. He attended North Roebuck Elementary School and L. M. Smith Middle School, and graduated from Huffman High School. He earned his bachelor of arts in political science at UAB and took classes at the Birmingham School of Law. He worked as a staffer for U. S. Representative Elijah Cummings in 2006 and 2007, on Barack Obama's presidential campaign in 2008, and later in community relations for Washington D.C. Mayor Adrian Fenty.

Davis was a candidate for Alabama House District 59 in the 2014 Democratic primary, but finished third behind incumbent Mary Moore and challenger William Barnes. He also finished third in the Birmingham City Council District 2 race, behind Darrell O'Quinn and Johnathan Austin, in the 2017 Birmingham municipal election. He challenged Moore again without success in the 2018 primary.