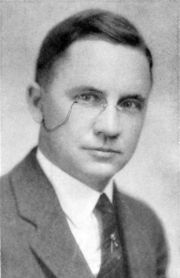 Clarence J. Going (born c. 1888; died December 1965 in Houston, Texas) began his career as a biology teacher at Phillips High School in 1910. He was the school's principal from 1922 to 1939 and assistant superintendent of Birmingham City Schools until he retired in 1957.

Going Elementary School, which opened in 1966, was named in his honor.