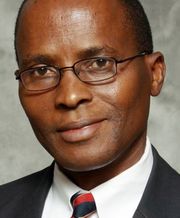 Clement Essien Ebio (born in Nigeria) is the founder and CEO of RCM Medical Group, a former executive at BBVA Compass, and former chair of the Birmingham Business Alliance's Small Business Council.

Ebio grew up in southern Nigeria, and graduated from the Community Secondary School in Ukanafun. He immigrated to the United States to attend college. He earned a bachelor's degree and master's in business administration at Samford University in 1988, and then entered a management training program at Central Bank of the South, which became BBVA Compass in 2007. He rose to the position of branch manager and assistant vice president of operations over his 19-year career there.

Ebio left Compass in 2009 to launch his own medical billing company. He became interested in the business through observing opportunities during the Great Recession and partnered with a friend who ran a similar company in California before founding RCM Medical Billing.

In April 2018 Ebio was one of four individuals charged by the United States Attorney for the Northern District of Alabama with health care fraud conspiracy and drug distribution conspiracy relating to the operations of the Care Complete Medical Clinic at 1300 Bessemer Road.

Ebio has served on the boards of the Nigerian American Progressive Society of Birmingham and the Maria Regina Foundation.