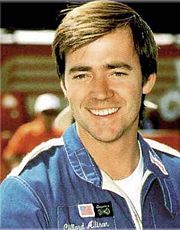 The son of Bobby and June Allison, Clifford and his older brother Davey grew up in Hueytown and at the racetracks. Clifford raced late-models, ARCA, All-Pro and NASCAR Busch Series. He won the 1987 Montgomery International Raceway Championship. He was his father's crew chief when Bobby won the 1988 Goody's 300 NASCAR Busch Series race.

Clifford died in a one-car crash at Michigan International Speedway while practicing for a Busch Series race. He was survived by his wife, Elisa Sproule and their children Brandon, Tanya and Leslie. He is buried at Highland Memorial Gardens.