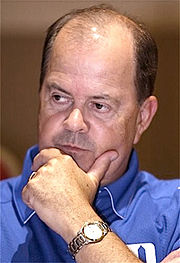 David Cutcliffe (born September 16, 1954 in Birmingham) is the head football coach of the Duke University Blue Devils and the former head coach of the Ole Miss Rebels. He is recognized for his record-setting offensive production at both schools and has compiled an overall record as a head coach of 75–72.

Cutcliffe was one of six children born to Mr & Mrs Raymond Cutcliffe. He played high school football at Banks High School in East Lake and later served as a student assistant on the staff of Bear Bryant's Alabama Crimson Tide football team.

Cutcliffe's coaching career began at Banks High School where he served as an assistant beginning in 1976. He became the head coach in 1980, compiling a 17-4-1 record in two seasons. In 1982 he was hired as a part time coach at the University of Tennessee. A year later he was promoted to full time status as the tight ends and assistant offensive line coach. By 1990 Cutcliffe was coaching quarterbacks, and three years later became the Volunteers' offensive coordinator. As coordinator, Cutcliffe coached Peyton Manning and helped lead the Vols to two Southeastern Conference Championships and the 1998 national championship.

On December 2, 1998, Cutcliffe left Tennessee to take the job as head football coach at the University of Mississippi, succeeding Tommy Tuberville. Cutcliffe had success at Ole Miss, where he recruited Eli Manning. In 2003, Cutcliffe's Rebels tied LSU for the West Division title and a win in the Cotton Bowl. After his only losing season in 2004, Athletic Director Pete Boone asked Cutcliffe to prepare a detailed plan for improving the football program, including replacing his assistants. Cutcliffe refused and was subsequently fired.

After his stint at Mississippi, Cutcliffe was hired as the quarterbacks coach at Notre Dame, but health problems forced him to resign. After taking a year off he returned to Knoxville, where three of his children were attending college. He resumed the position of offensive coordinator after the resignation of Randy Sanders (who had succeeded him in 1998). In 2006 and 2007 Cutcliffe's offense, led by quarterback Erik Ainge, propelled the Volunteers to back-to-back 9-4 records, including wins over #12 California and at #9 Georgia.

On December 14, 2007 Cutcliffe was hired to replaced Ted Roof as the head football coach at Duke University. He inaugurated a new strength and conditioning program and led the team on cross-campus walks to Wallace Wade Stadium before each home game. The Blue Devils opened the 2008 season with a home victory over James Madison and routed the Virginia Cavaliers 31-3 to claim Duke's first Atlantic Coast Conference victory since the 2004 season. The Blue Devils also defeated Southeastern Conference opponent Vanderbilt 10-7 on the road, but finished the season with a 4-8 record.

The Blue Devils struggled to maintain momentum through the next three seasons. Cutcliffe was considered a candidate for the vacancy at the University of Tennessee left by the departure of Lane Kiffin, but opted to remain in Durham. His football team found its footing in 2012 with a victory over North Carolina and the school's first bowl eligible team since 1994. The 6-7 Blue Devils lost to Cincinnati in the Belk Bowl, but Cutcliffe was named Atlantic Coast Conference Coach of the Year.

In 2013 Cutcliffe's Blue Devils upset 14th-ranked Virginia Tech, clinched the ACC's Coastal Division with a 27-25 victory over North Carolina and fell to #1-ranked Florida State in the conference championship. A hard-fought match-up against Texas A&M in the Chick-Fil-A bowl saw Duke leading 38-17 at the half, but ended with a heartbreaking 52-48 loss. For leading Duke to its first-ever 10-win season, though, Cutcliffe was honored as the ACC, the Walter Camp Football Foundation, The Sporting News, the Maxwell Football Club and the Bobby Dodd Foundation as their respective selections for "coach of the year".

Cutcliffe was inducted into the Alabama Sports Hall of Fame in the Class of 2016.

Cutcliffe is married to the former Karen Oran of Harriman, Tennessee. They have four children: Marcus, Chris, Katie, and Emily.