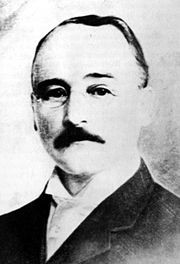 Fox, the son of grocer John Fox, came to Birmingham with his family in 1888. David and his brothers went to work at Alice Furnace while their father operated his store nearby.

Unsatisfied with the political power of the city's working majority, Fox, an active member of the Amalgamated Association of Iron and Steel Workers union, began gathering supporters at Sylvester Daly's Rolling Mill Saloon to launch a new organization, the Workingmen's Democratic Social Club, which served as his political coalition. They called for limits on the power and privilege enjoyed by company owners at the expense of working men.

Fox and Daly both won seats on the Birmingham Board of Aldermen on A. O. Lane's coattails in 1890. By the end of 1891 the pair were securely in control of the City Democratic Party Executive Committee. Fox used that position to call for an early mayoral primary in the 1892 Birmingham municipal election. His home was damaged in a fire that was started by an "incendiary device" at the Fox's Sons Store next door on March 21.

During that Democratic party primary, opponents of Fox's machine accused his supporters of stuffing ballot boxes and destroying votes. His representatives tried to close down the Ward 4 polling place rather than allow his opponents' agents to enter, triggering a fistfight.

Fox's margin of victory came largely from his base supporters in Ward 1 and other working-class districts. He addressed fears that he would "make war on capital" in his acceptance of the nomination. He promised to award no "special privileges" and to stand for "equal and exact justice". Some party members affiliated with the Citizens' Reform Union threatened to challenge the returns or to back an independent candidate against him in the general election, but eventually agreed to preserve party unity. He took office in January 1893 and rewarded both supporters and prominent opponents with positions in his administration.

Rufus Rhodes and the Commercial Club of Birmingham maintained their distrust of Fox while he was in office, leading efforts to reduce his executive power to appoint municipal officials, especially to the Birmingham Police Department. Just before Fox took office, Rhodes' Birmingham Daily News endorsed a bill that would establish an independent "Birmingham Police Commission". The bill passed and Jefferson County Probate Court Judge M. T. Proctor appointed five members to the commission. Fox, however, was not entirely defeated. He and his Board of Aldermen passed ordinances requiring that the Commission get approval from the Mayor for all hirings and dismissals. The Commission ignored the ordinance and established its own force, which Fox refused to swear in. Instead he commissioned a separate force, led by Chief S. H. Norton.

Rhodes' paper published two letters purporting to be from Fox to Norton instructing his chief not to enforce the laws against liquor sales on Sundays and gambling. Fox countered by having M. M. Boggan, a Commission member, arrested for illegal gambling at the Irish Democratic Club, demonstrating the hypocrisy of his opponents who wished to cast the police controversy as a moral issue.

Late in his term, Fox was forced to reduce the city's allocation to Birmingham City Schools. The Birmingham Board of Education was forced to begin charging a monthly tuition for pupils in order to keep the schools open. Fox did not run for re-election in the 1894 mayoral race, but his machine supported Robert Warnock in a Democratic primary that was boycotted by prominent opposition groups who wanted to institute non-partisan elections. Independent candidate James Van Hoose defeated Warnock in the general election, with most of his support from coming from the city's professional class, and from black voters.

In his retirement, Fox and his wife resided at 2176 Highland Avenue. Fox died in May 1913 and is buried at Elmwood Cemetery.