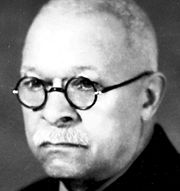 Dolphus Theodore Shields (born April 10, 1859 in Georgia; died June 3, 1950 in Birmingham) was a carpenter and church deacon, and the great-great grandfather of First Lady Michelle Obama.

Shields was the son of Melvinia, a slave who was bought by Henry Shields in 1852 after the death of his father-in-law, her former master, David Patterson. Melvinia was 15 at the time and gave birth to Dolphus around 1859. It is possible that Henry was the father, as he was listed as mulatto in the 1870 census along with three siblings. She moved with her children to Bartow County, Georgia in the 1880s and Dolphus married Alice Easley, daughter of Mariah and Bolus Easley who had also been owned by Patterson.

Around 1888 Dolphus and Alice moved to Birmingham. He had learned to read and write and worked as a carpenter, building his own home by 1900 and opening his own shop by 1911. He co-founded First Ebenezer Baptist Church and later Trinity Baptist Church, supervising Sunday Schools there and at Regular Missionary Baptist Church. The latter church helped him celebrate his 90th birthday at his home at 850 Lomb Avenue in 1949. (The house has since been demolished.)

Shields died in 1950 while suffering from pneumonia 40 days after being paralyzed by a stroke. He is buried at Shadow Lawn Cemetery.