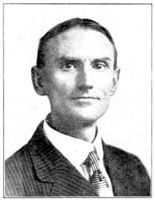 Edgar C. Horton or Horten (born in South Carolina) was the Official in Charge of the Birmingham Weather Bureau from 1911 to 1945.

Horton was born in South Carolina and decided to join the United States Weather Bureau while he was a student at The Citadel. His first post was in Jacksonville, Florida, followed by a stint with the Hurricane Service in Santiago, Cuba. That was followed by several short postings before he was assigned to the Montgomery office in 1906, and then put in charge of the Birmingham bureau in 1911.

Horton employed his daughter, May Hamilton to record instrument readings.

Horton and his family resided within the 1907 Weather Forecast Office Birmingham at 1221 13th Street North, staying there even after the bureau was merged with the station at the Birmingham Municipal Airport following World War II. They moved out only when the building was sold to Fountain Heights Methodist Church in 1953.