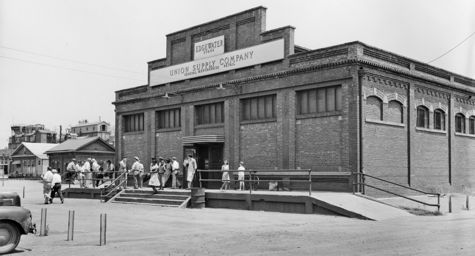 The Edgewater Store in July 1946

U.S. Steel's TCI Division established the Edgewater site on the Warrior coal field in 1910. It was soon the home of both the Edgewater Mine (Mine No. 13), and the company's Central Water Works pump station, which pumped water from the newly-created reservoir at Bayview Lake to the Ensley Works.

Initially the mine employed prisoners brought to the site on the Kansas City, Memphis and Birmingham Railroad, and the same line was used to haul their mined coal to coke ovens for use at the company's Ensley Works.

The first houses were of the 4-room square top, pyramid-roof type that characterizes many industrial houses of the early 20th century. Each house had a yard and a privy building at the alley which contained a coal scuttle and garbage bin, all serviced by TCI sanitation department trucks. Later workers' houses, built between 1914-15 and 1917-21, were constructed in other styles with varying rooflines, including shotguns, 6-room duplexes, and 4-room gabled houses with attached porches. At this time, renters were given limited options for paint colors. Supervisors' houses were built on the hillsides overlooking the village. A two-story "teacherage", housing the unmarried schoolteachers, was built at the corner of Galveston and Iceland.

The village was racially segregated with the white workers and their families living in "Edgewater A" on the eastern "lobe" and black families in "Edgewater B" to the west. The white section was further bisected into an "Old Camp" and "New Camp" by a raised train trestle. Lots for segregated churches and schools were also provided.

The Edgewater Store stocked groceries and household supplies, and its adjoining "dope stand" sold snacks and soft drinks. The Edgewater Grammar School was constructed in 1913. A "Guild Hall" housed meetings of the Methodist and Baptist churches on alternate Sundays, as well as lodge meetings for fraternal organizations. Catholic families organized their own Sacred Heart Mission Chapel. Nearby swimming holes were used for recreation and baptisms.

In 1913 TCI reorganized their health department, hiring Lloyd Noland to supervise from newly-built hospital in Fairfield. Free health services were available to those miners who opted into the company's $1.25/month "medical list." The company also provided social workers to each of its villages. A "community house" offered a full slate of programs for children and wives aimed at applying modern scientific ideas about proper housekeeping and social health.

In 1916 residents of Edgewater participated in a major pageant, called Wenonah: The Magic Word produced through the company schools to celebrate the establishment of a new model village at Wenonah. Other recreational and artistic opportunities included industrial league baseball, weekly dances, community sings, company sponsored lectures and literature libraries covering technical topics on mining and manufacturing, and various competitions for gardening and decorating the houses.

The town was expanded to accommodate a wartime boom in demand for steel in 1918. During the 1920s the Edgewater mine was the 2nd largest in the district, employing 1,252 miners with production in excess of 800,000 tons per year. Renovations to existing houses provided running water and, in some cases, indoor toilets. The program of social welfare continued at full strength through the 1920s, but the company's commitment to it was tested by numerous factors that emerged during the Great Depression of the 1930s. The workforce at the Edgewater mine was reduced greatly by 1933. The company deferred rent on the miners' houses and utilities and doled out credit at the company store (a move derided as giving out "pity slips" by the miners)

The company's schools were turned over to the Jefferson County School System in 1932 and the social science department was dismantled the following year.

Further reductions in mining operations at Edgewater occurred after the opening of the Concord mine near Hueytown. The mine was finally closed in 1962.

During the second World War, workers were more mobile and less dependent on the company for goods, services and recreation. In 1952 all the village real estate was sold to the John W. Galbreath Real Estate company ("America's foremost broker of company towns.") to be subdivided and sold. TCI workers living in the houses were given the first option on the properties, with the company offering a financing plan to help them make the transition from renters to owners.

In the years since, the village has gradually lost most of the unique elements of its role as a model village. The schools were closed by the county after the mine closed. Several of the houses have been destroyed or dismantled. Others have been extensively modified or enlarged. Most of the privy buildings have been removed. The churches, however, have remained active, with Edgewater Methodist Church taking over the former Guild Hall. Edgewater Baptist Church, which had moved into the mine's former bath house, demolished that structure after constructing their own large building on the site of the camp's former kindergarten.

The Edgewater Community Association is planning a 100th anniversary celebration for July 4, 2010. The association plans to rename some of the community's streets for prominent residents.