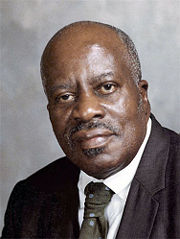 Emory Overton Jackson (born September 8, 1908 in Buena Vista, Georgia; died September 10, 1975 in Birmingham) was editor of the Birmingham World from 1941 until his death, earning the nickname, "The Voice of Black Birmingham".

Jackson was one of eight children born to Will Burt and Lovie Jones Jackson. He grew up in the Enon Ridge neighborhood of Birmingham and graduated from Industrial High School and enrolled at Morehouse College in Atlanta, Georgia in 1928. While there he was elected student government president and edited the Maroon Tiger newspaper. After earning his bachelor's degree with majors in English, economics and education in 1932 he moved to Dothan to teach English and coach the basketball team at Carver High School. He returned to Birmingham in 1933, briefly teaching at Westfield High School (where Richard Arrington, Jr was one of his students).

Jackson then joined the staff of the Birmingham World in 1934 as a sports writer and book reviewer. Later his "The Tip Off" column became regionally known as an articulate voice calling for racial justice and placing the events of the nascent Civil Rights Movement into historical context.

In 1941 Jackson was promoted to managing editor. He left to serve in the Army during World War II and joined the Birmingham Chapter of the National Association for the Advancement of Colored People after he returned. He helped fellow black veterans in their struggle with local bureaucrats for their GI Bill benefits and encouraged them to vote.

He was the founder and first president of the Alabama State Conference of the NAACP. As an editor and columnist, Jackson called for numerous changes, but encouraged readers to pursue equality through education, voting and entrepreneurship rather than through civil disobedience or violence. Early in his career Jackson opposed to plans to segregate the Freedom Train, and convinced its sponsoring organization, the American Heritage Foundation, to cancel the exhibit's Birmingham stop. He led the NAACP's challenge against Birmingham's segregation laws pertaining to residential zoning. When anti-integrationists began bombing black-owned houses, he urged the city to fully investigate the crimes and to hire black police officers and firefighters to improve service to black neighborhoods and defuse tensions. When then-attorney general John Patterson won an injunction preventing the NAACP from operating in the state, Jackson secured the organization's records in his safe at the Birmingham World.

An early supporter of the Southern Christian Leadership Conference and the Alabama Christian Movement for Human Rights, Jackson gradually withdrew from those organizations as they became involved in mass demonstrations. He led an offshoot group of African Americans arguing for reliance on the courts and electoral influence to produce political change.

A plaque honoring Jackson's memory was installed in October 2012 outside his former office, now the Nelson Brothers' Cafe.