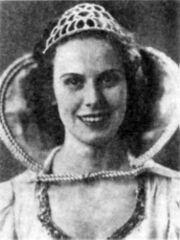 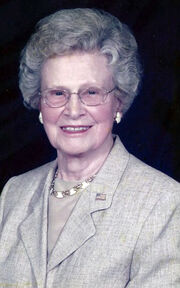 Evelyn Tulley Williams (born July 3, 1917 in Wren, Mississippi; died March 20, 2020 in Hoover) was a shop clerk at Kress and was crowned Miss Vulcan during the 1939 Vulcan Dedication Celebration.

Evelyn was the daughter of Reverend Hugh L. Tulley and his wife, Josephine. The family moved to Sulligent (Lamar County) in 1925 and then to Birmingham in 1929 where he took over the pulpit at Wylam Baptist Church. Evelyn graduated from Ensley High School in 1937 and took a job soon afterward as a clerk at Kress department store. In 1939 she was selected to represent the store in the pageant celebrating the dedication of Vulcan Park.

The store's manager, J. C. Inglis, toured various civic clubs with her to raise sponsors for her candidacy as "Vulcan Queen". Her friends and fellow church-members helped to sell the 50-cent tickets that catapulted her to the top of the slate as radio stations updated listeners nightly on the evolving count.

Tulley led from start to finish and was crowned on May 7, during a Hollywood-styled gala on the first day of the 10-day celebration. Erskine Ramsey gave her a crown and a kiss in front of a crowd of 3,000. She also received a week's paid vacation to make appearances around town.

One of the buyers of her tickets was Glenn Williams. They met at a church function a few weeks after the pageant and married a year later. The couple had two daughters, eight grandchildren and nine great-grandchildren.

In 2004 the story of "Miss Vulcan" was recounted in a Birmingham News article by Bill Caton. The article served as the inspiration for the 2007 Red Mountain Theatre musical Miss Vulcan 1939.

She and her husband, Glenn resided in Hoover and raised two daughters, Sarah and Glenda. Glenn died in 2006. Evelynd died in 2020 and was buried at Elmwood Cemetery.