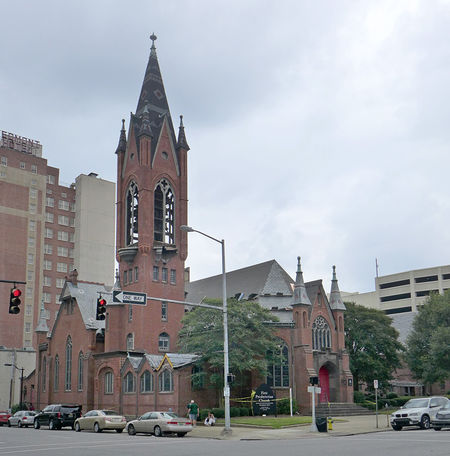 Founded in 1858 as the Old School Presbyterian Church of Elyton, the church began offering services in a small building on the northeast corner of Square Street and Morris Avenue in Elyton. When the Elyton Land Company announced that it would grant churches of any denomination free lots downtown Birmingham, the Presbyterians were the first to select a lot. Using wagons, they moved their building, nicknamed the "Old Sail", to the northeast corner of 4th Avenue North and 21st Street around 1872.

The church's present brick building was constructed in 1888 to accommodate their growing congregation, and is known as the "Mother Church" of Presbyterians in Birmingham, because it helped to establish other churches in the area. In 1907 the church commissioned a marble baptismal fountain from sculptor Giuseppe Moretti.

Several changes have been made to the original building. The first was moving the front entrance to 4th Avenue as 21st Street was widened. The Rushton Memorial Carillon was installed in the bell tower in 1924, one of only three in the United States at the time. It housed 25 bells weighing 8 tons. The church was remodeled in 1950 to include a new pipe organ and the Phillips Chapel installed as a memorial to Dr. John Herbert Phillips and his wife. In 1957, architects D. H. Greer and W. N. Chambers designed the addition to the education building.

During the lead-up to the organized protests of the Civil Rights Movement's Birmingham Campaign, First Presbyterian's pastor, Ed Ramage was one of the eight moderate clergymen who signed an open letter entitled "A Call for Unity" asking Birmingham's African American residents to negotiate with local leaders rather than follow outsiders toward confrontation. Ramage was moved by Martin Luther King, Jr's response to the letter, later published as "Letter from Birmingham Jail". He resolved to welcome black visitors to the church, though he met strong resistance from some in the congregation. He and his family received death threats and his car's tires were slashed. A lay committee within the church was formed to investigate "Communist treachery". He remained steadfast, telling church elders that he would not sacrifice Christian principles to preserve peaceful unity. In the fall of the same year, Ramage accepted a position at St Paul's Presbyterian Church in Houston, Texas and retired ten years later. In the ensuing years the leaders of First Presbyterian have come to treasure the example set by their former pastor and his courageous focus on Christian principles in a storm of torment has served as a guidepost.

The Ruth and Naomi Senior Outreach ministry was founded at First Presbyterian in 2003.