Hewitt-Trussville Middle School (HTMS) is a public middle school located at 5275 Trussville-Clay Road in Trussville. It is the only middle school in the Trussville City Schools system, serving grades 6-8. It and is named for the early local educator Robert Hewitt. School colors are red and gray, and the athletic teams are called the Huskies.

Like other schools in Trussville, HTMS was part of the Jefferson County School District until the City of Trussville formed its own school system in 2005. Trussville City Schools opened two new elementary schools that year, Paine Primary and Intermediate Schools, which fed into HTMS. In 2016, Paine was combined into one school, and the new Cahaba and Magnolia Elementary Schools opened. All three elementary schools now feed into HTMS in the sixth grade. 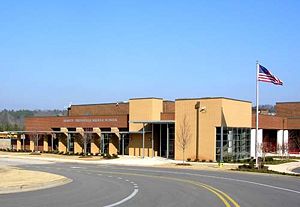 HTMS students can participate in a variety of extracurricular activities, including the following: