From Bhamwiki
(Redirected from Homewood Library)
Jump to: navigation, search 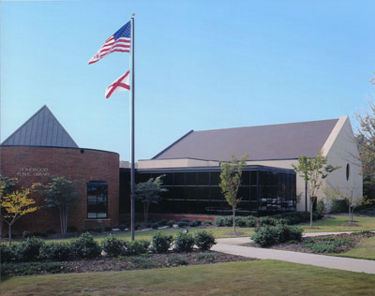 The Homewood Public Library is located at 1721 Oxmoor Road in the city of Homewood. It is a member of the Jefferson County Library Cooperative. Over 48,000 patrons per month use the library's services, which include a collection of over 94,000 books as well as DVDs, videos, CDs, audiobooks, and electronic games. The library also offers meeting rooms, terminal-based and wireless internet access, laptops for check out, computer classes, and special events for children, teens and adults. The library director is Deborah Fout. 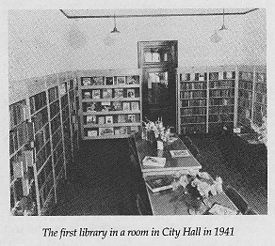 The library was established on March 24, 1941 with no more than 3,000 volumes, including 1,000 on loan from the Jefferson County Free Library, in 30-by-18 foot room provided by the city council on the 2nd floor of Homewood City Hall. The first library director was Mary Katherine Switzer.

In the late 1940s or early '50s, the city bought six lots on the southwest corner of Oxmoor and Roxbury Roads for $6,000 to build a library building. In 1951, residents approved a two-and-a-half mill property tax for civic approvements, including the library building. The building was designed by William Chambers and built by Capitola Construction Company at a cost of approximately $68,000. Groundbreaking took place in September 1951 and the new facility opened on May 7, 1952.

By the late 1970s, the city council was again considering expansion of the library. In 1982 the council and library board settled on the Homewood Chuch of Christ building a few blocks down Oxmoor near the intersection of Central Avenue, which was purchased for $1.2 million. Architects Paul and Walter Anderton and firm Sherrod Construction were hired to remodel the church. The new facilty, which is still in use, opened on March 1, 1987.

In 1996, a major renovation of the building was started. Bricks were inscribed with donors' names to help raise funds for the $3-million project. The renovation was designed by Davis Architects and built by M. J. Harris, Inc. The grand reopening was held on April 16, 1998.

In 2001, Homewood Public Library earned Three Gold Stars for meeting so many of the established state standards for libraries as outlined by the Alabama Library Association and the Alabama Library Service. In previous years, the library was ranked seventh in the state and was awarded the Certificate of Achievement at the Two Star level.

In 2002, the library was voted as Jefferson County's "Favorite Library".

In 2004, Homewood Public Library was awarded a Blue Ribbon Certificate of Achievement for Excellence in Library Service. This is the highest distinction given to public libraries for excellence in library service. In order to receive this recognition, a library must meet or exceed more than seventy specifications based on the population of the city or county that established the library. To date, only nine libraries in Alabama have received this award. The award was presented by the Public Library Division of the Alabama Library Association. Gov. Bob Riley also presented Homewood Public Library with a letter and certificate of recognition from the governor’s office.

In 2009, Homewood Public Library earned a national Four Star Rating for Library Service in the Library Journal Index of Public Library Service. This system scrutinizes statistics that describe library service outputs, such as visits, circulation, public Internet computer usage, and program attendance. Out of 7,268 public libraries across the nation only 258 received star ratings. Homewood Public Library is one of only five libraries in Alabama to receive such an honor and one of only twelve in the Southeast. This Four Star rating followed the Three Star rating that was received in an earlier Library Journal survey.

There is a legend that the former church was constructed on ground sacred to the natives of the region. Librarians have reported odd noises and falling books. Some workmen during the 1990s renovation witnessed electrical cords moving on their own.1.

The Library houses the Ellenburg Art Gallery which showcases the work of local artists, craft groups, and other exhibits on a monthly schedule.

The first library board, known as the Library Committee of the Homewood City Council, was established in May 1941. It consisted of city councilman James A. Head and members of four Homewood civic groups: Mrs. C. A. Thompson of the Shades Cahaba PTA, Mrs. F. G. Hamner of the Edgewood Elementary School PTA, B. C. Matthews of the Lions Club, and Dr. Paul Shannon of the Exchange Club.