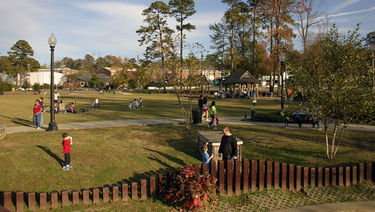 A view of Griffin Creek as it flows through Homewood Park. Photo by Robert Matthews 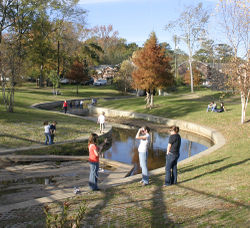 Another view of Griffin Creek winding through Homewood Park. Photo by Robert Matthews

Homewood Central Park, often known simply as Homewood Park, is a public park located in Homewood at 1632 Oxmoor Road, where Oxmoor intersects Central Avenue. It's facilities include a swimming pool, to which residents and non-residents may buy season passes; a playground, home to Cate; tennis courts; picnic pavilions; and a community center. Griffin Creek also runs through the park.

The land first became a city park in 1948. From October 2002 to October 2003 the park was closed for a $2.6 million renovation contracted to the McCrory Building Company.

The new work included landscaping of the creek's shoreline and new bridges over it, new picnic pavilions, an enlarged playground, an amphitheater, public restrooms, and a small skate park. In July 2008 the Park and Recreation Board voted to remove the skating area following a week which saw the assault of a police officer and the confiscation of a firearm at the park.

This article is a park stub. You can help BhamWiki by expanding it.
Retrieved from "https://www.bhamwiki.com/wiki/index.php?title=Homewood_Park&oldid=129691"
Categories: