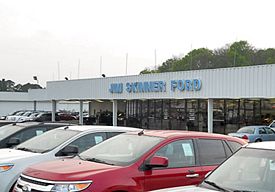 Iron City Ford (formerly Jim Skinner Ford) is an automobile dealership located at 9924 Parkway East in Huffman. It was founded in September 1958 by Jim Skinner at 2109 Avenue E Ensley. The dealership moved to its current location in 1974.

Jim Skinner Ford was known for a long-running series of commercials in which Skinner poked fun at himself. The series was refreshed in the 1980s with the participation of Skinner's sons, Jimmy and Bobby. After Jim Skinner died in 2007 ownership of the business fell to his sons. They renovated the facility in 2017.

In early 2018 the Skinners sold the business to Hanania Automotive Group of Jacksonville, Florida. It was rebranded as "Iron City Ford".