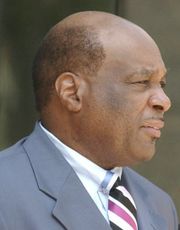 Jeff Germany (born in East Thomas) is a former Birmingham City Council representative and member of the Jefferson County Commission. He was convicted of misusing public funds in 2006.

Germany attended Wilkerson Elementary School and graduated from Parker High School. He went on to earn a bachelor of arts in social science with a minor in economics at Miles College in 1970. He is a member of the Omicron Lambda Chapter of Alpha Phi Alpha.

Germany made the runoff in the 1977 Birmingham City Council election, but did not win a seat. In 1979 he was elected to the first of three terms on the City Council. He was Council President Pro-Tem from 1987 to 1989. In 1989, the City Council was forced to move to district-based voting. Germany and fellow councilors William Bell and Linda Coleman all resided in District 9 at the time. Bell chose to move to another district while Germany and Coleman competed for District 9, with Germany losing.

While in office, Germany served on several civic boards, including those of the Jefferson County Lung Association, the A. G. Gaston Boys' Club, Jefferson County Health Care Authority, Birmingham Health Care for the Homeless, and Positive Maturity. Jeff Germany Parkway, a small circular drive leading to the Cherry Hill Health Care Center off Cherry Avenue, is named in his honor.

Germany is also the founder, president and CEO of Lobcom, a consulting firm. He attends Sixth Avenue Baptist Church.

While on the commission, Germany sent district funds to the Jefferson County Committee for Economic Opportunity with instructions for JCCEO executive director Gayle Cunningham to distribute most of the money to organizations he listed. These included MedHealth Management, the American Charities Foundation, and the East Thomas Baseball Association. Horace Miller, president of MedHealth, then assisted Germany in purchasing a Mercedes for his wife, Lois, by contributing $17,000 for a down payment. American Charities, headed by Joseph Turnes, received 90% of the funding for its mission "to distribute funds to the community" from Germany's office (through JCCEO). Turnes then sent out checks as Germany directed, including payments to one of Germany's ex-girlfriends, to another personal friend, and to Horace Miller. The East Thomas Baseball Association (ETBA), headed by Germany's close friend Larry Combs, received funding through JCCEO and the county's parks division at Germany's direction. Combs transfered much of the money to his personal account and also gave large sums to Germany and to Clifton McElroy, a mutual friend from whom both had borrowed money. Over the span of time covered in the federal indictment, Germany approved a total of $479,990 in illegal disbursements. Other similar practices were documented outside the period covered in the indictment, and entered as evidence of a conspiracy to misdirect funds.

Germany was convicted on June 14, 2006 of four counts of federal program fraud and one count of conspiracy United States District Court for the Northern District of Alabama, Robert Propst presiding. He was sentenced to 43 months in prison and ordered to forfeit $126,830 to the county. He was also required to spend two years in supervised release following his imprisonment.

Germany served his time at the Maxwell Air Force Base Prison Camp in Montgomery. He was released on September 1, 2009 after serving 33 months. In a statement made at his release, he pledged to work toward prison reform, "especially for first time non-violent offenders," and to counsel other former prisoners.