This article is about the 1875 courthouse. For others, see Jefferson County Courthouse (disambiguation). 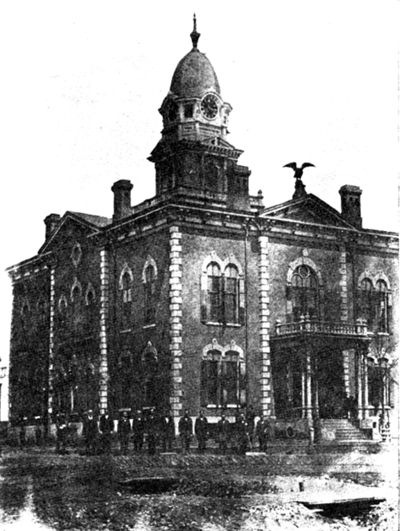 The fourth Jefferson County Courthouse was a large brick and stone building erected in to house the offices and courts of Jefferson County after the 1873 referendum which resulted in the relocation of the county's seat of government to Birmingham from Elyton.

Bids for construction of the new courthouse were received by Probate Judge John Morrow and opened by the Jefferson County Commission on May 9, 1874. Each bidder was allowed to specify what portion of their bid would be required in cash and what portion could be made in the form of bonds drawn on the county's revenues.

The courthouse was built on the corner of 21st Street and 3rd Avenue North with a county jail adjoining it to the north. The total construction cost was $50,000. Completion was delayed by problems with the foundations and the courts met temporarily at Sublett Hall before the new building was completed in 1875.

The county rapidly outgrew the building, and in 1887 the twelve-year-old courthouse was deemed unsafe. A new larger courthouse building was constructed on the same site.