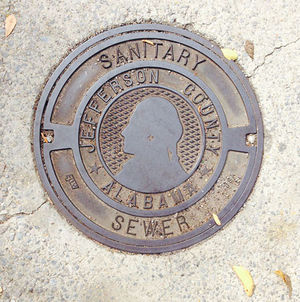 The Jefferson County Sanitary Sewer System is a public utility which captures sanitary wastewater from properties in Jefferson County and conducts it, through an expansive network of underground sewer pipes, to wastewater treatment plants where it is cleaned and returned to natural streams.

The system was initially planned and constructed by the Jefferson County Sanitary Commission, which was created in 1901 with the authority to levy a property tax of up to 0.5 mills to finance construction. Julian Kendrick, Birmingham's city engineer, laid out the original plan consisting of two westward-draining trunk lines: one running along the Valley Creek corridor to a point below Bessemer, and one following Village Creek from East Lake to a point below Ensley. Both streams are tributaries of the Black Warrior River.

Construction of the two-to-five-foot diameter trunk lines began in 1902, flowing into large septic tanks until more advanced treatment facilities could be designed. The fifteen-mile Valley Creek line was completed in 1905 at a cost of $282,024. The 10-mile Village Creek line, completed in 1906, was built for $107,966 with branches extended to Avondale and Woodlawn at additional cost. Birmingham connected its existing network, consisting of 58-miles of sewer pipe, to the new trunk lines and other municipalities with such systems, per Act 714 of 1901, did the same.

Operation of the septic tanks and the use of its effluent for agricultural purposes was contracted to Adler & Company in 1905. Once the initial effort to plan and implement the main trunk lines and plants was completed, the Sanitary Commission was dissolved and the responsibility for managing and expanding the sewer system passed back to the County Commission.

The county settled both lawsuits before District Court Judge J. Foy Guin, Jr by signing a consent decree in December 1996. The county agreed to make the improvements necessary to comply with the federal Clean Water Act, and to spend $30 million for the establishment of protective greenways to improve water quality in the Cahaba and Black Warrior River systems.

As work began, rates paid by sewer customers began increasing, from among the lowest in the country to the highest. In 2003 an independent study by BE&K found shortcomings in the county's plans, and determined that much of the $3.3 billion spent on sewer expansion was not needed to meet the terms of the agreement. Among those expansions was a proposed $84 million "Super Sewer" to service the Upper Cahaba Watershed around Cahaba Heights and parts of Mountain Brook. The projected cost quickly soared to over $140 million until it was halted amid complaints from the Birmingham Water Works Board and the public.

Commissioners and Environmental Services director Jack Swann justified the expansions as a means of generating revenues from new connections to offset the costs of upgrades to existing systems. However, corrupt practices in contracting the engineering and construction work, as well as the risky financial instruments used to pay for it, began coming to light. In 2005 twenty-one officials and contractors were indicted for bribery, conspiracy and obstruction of justice. More than half of them were convicted in federal courts.

Meanwhile, the county's financial schemes collapsed on themselves, leaving the taxpayers with an enormous debt and forcing the county to default on bond payments and, in November 2011, to file what was then the largest municipal bankruptcy in U.S. history.