Jim Davenport's Pizza Palace is a family-owned pizzeria located at 2837 Cahaba Road in Mountain Brook Village. It was opened in May 1964 by businessman Rex Hollis who named it for his friend, San Francisco Giants star Jim Davenport, to attract notice.

The restaurant features thin-crust pizzas similar to the kind Hollis and Davenport enjoyed in Minneapolis in the mid 1950s when Hollis was working in investments and Davenport was playing AAA baseball. The pizza has a tangy home-made sauce, and is cut into small rectangles rather than large wedges. The "Jim Special" has ground beef, pepperoni, Italian sausage, mushrooms, onions and green peppers. The "Rex Special" is made with its sausage, onion and green peppers laid on top of the cheese. 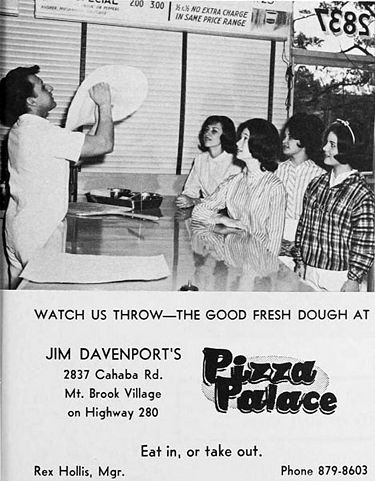 Hollis and his wife, Ardyce, walked to the restaurant from their home in the nearby Mountain Brook Manor. In the beginning, Rex would go door to door introducing the exotic food to neighbors. Soon it built up a loyal customer base. The addition of an assortment of video game machines, which are now considered "classics", appealed to repeat customers.

The main dining room is softly lit and decorated with wrought iron and classic movie-star photos. A second dining room and video parlor is neon-lit. The kitchen is open to the lobby and is decorated with souvenirs of Jim Davenport's baseball career.

During the 1980s, Rex's son Mark managed a second location on U. S. Highway 31 in Vestavia Hills, with a classic red delivery truck parked outside. Ardyce died in 2000 and the business was taken over by Hollis' daughters, Heather Norris and Diane Hollis. Rex died in 2009, and Diane in 2010. Now Norris runs the restaurant with her niece, Amanda Thames and general manager [Nick Nicholson]]. Norris makes the sauce and dough, as well as salad dressings each morning using her father's secret recipes. Pizza baker Dave Simpson has hand-tossed the thin dough for three decades.

In 2004 Davenport's agreed to relocate its sign from the roof to the front of the building to comply with Mountain Brook's newly-passed ordinance regarding commercial signage. In November 2012 the interior was opened up with the removal of walls and a second pizza oven installed.

Davenport's has been honored for "best pizza" several times by the Birmingham News reader's choice awards.