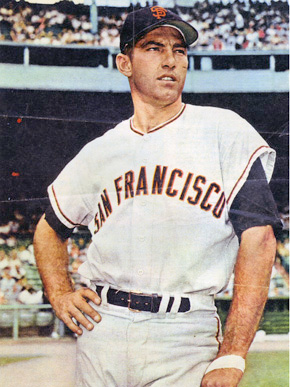 James Houston "Peanut" Davenport (born August 17, 1933 in Siluria; died February 18, 2016 in Redwood City, California) was a right-handed third baseman who played for the San Francisco Giants for 12 years (1958 through 1970). After finishing his playing career he became a coach and managed the Giants for the 1985 season.

Davenport grew up in Shelby County, quarterbacking the football team at Thompson High School. He married his high school sweetheart during his senior year and therefore was disqualified from getting a scholarship at the University of Alabama. Instead he went to Hattiesburg to play for Southern Miss. He got his revenge by upsetting the Bart Starr-led Crimson Tide twice at Montgomery's Cramton Bowl.

Davenport, scouted by Roebuck's Dickey Martin, was drafted by the New York Giants out of college in 1955 and was assigned to El Dorado, Arkansas of the Cotton States League for minor league ball. He led the league in hitting with a .363 average and was soon promoted to Minneapolis, Minnesota. While there he spent time with another Thompson graduate, Rex Hollis, who later named his Mountain Brook pizzeria for the rising star.

Davenport, along with fellow Siluria native Willie Kirkland, debuted with the Giants in the 1958 season, their first in San Francisco. In his first year Davenport appeared in 134 games, averaging .256 in 434 at bats with 12 home runs and 41 runs batted in. He also led the league with 17 sacrifice hits and set records for consecutive games without an error (97) and for initiating two double plays in a single game.

He had his best season four years later, batting .297 with 14 home runs and 58 runs batted in over 144 games for the World Series-bound 1962 Giants. Davenport won one of his seven Golden Gloves and was 24th in that year's National League All-Star voting and was on the roster for that years two All-Star Games. He singled to left field in his sole at-bat to advance Maury Wills in the 8th inning of the first game in Washington D. C., and did not play in the second game in Chicago. In the 1962 World Series, the Giants lost to the Yankees in seven games. While quiet from the plate, Davenport contributed by initiating a record four double plays during the series.

1969 was his last season on the starting roster, and he was released following the 1970 season in which he only batted in 22 games. His career totals over 1,501 games included 77 home runs, 456 runs batted in, and an overall batting average of .258. He played alongside Westfield native Willie Mays for his entire career, often accepting gift suits that Mays, known for his sartorial splendor, had worn only once or twice. Davenport also became close friends with slugger Bobby Bonds, who joined the team in 1968.

Davenport followed his playing career by becoming a coach in the major leagues. In 1985 he was given the job of managing the Giants, but was replaced by Roger Craig after the team had a miserable 56-88 record for the season. In 1987 he took a coaching job with the Philadelphia Phillies.