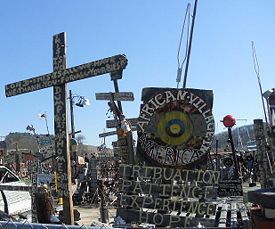 Joe Minter, Sr (born c. 1942) is a retired construction worker and "outsider" artist who created his "African Village in America" at his home and an adjoining vacant lot at 912 Nassau Street near Shadow Lawn Memorial Park in the Woodland Park neighborhood of Birmingham.

Minter served in the U. S. Army from 1965 to 1967 before turning to metalworking, construction and roadwork. He retired in 1995. Beginning in 1979 he began writing down his personal meditations on spiritual matters and the African American experience.

The African Village in America was begun in 1988 after Minter received a vision from God. The result, which is being continually enlarged, is a densely-packed art environment consisting of sculptures, monuments, signs, plantings and totems. The primary themes involve African-American history, particularly in Birmingham. Specific installations memorialize the 1963 church bombing and Martin Luther King, Jr's stay in the Birmingham City Jail. He includes references to the spirits of African warriors looking over their descendents, and the achievements of African-Americans in numerous fields. Alongside the themes of achievement and loss are constant Biblical references and words of praise and thanks to God. These messages are distinct from William Rice's "cross garden" in Prattville in that they favor praise and respect for God and creation rather than fiery appeals for salvation.