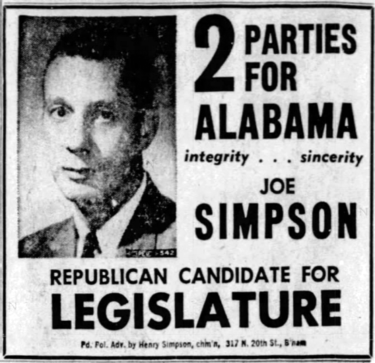 Simpson was the son of James A. Simpson, a state legislator and founding partner in the law firm of Lange, Simpson, Robinson & Somerville. His mother, the former Josephine Woodward Evins, a granddaughter of Joseph Woodward, died during his birth. James Simpson remarried in 1928, to Florence Evans, and had two more sons, Henry and James Evans.

Simpson attended Vanderbilt University, where he met Virginia Ellicott Youmans. He was serving as a Lieutenant in the U.S. Navy Reserve when he married her in Nashville, Tennessee on March 25, 1944. He completed law school at Yale University and joined his father's firm. In 1952 he was elected by the Mountain Brook City Council to preside over the city's Recorders Court.

In 1958 Simpson purchased "Rosemount", an 1830's Greek Revival-style plantation house in Greene County, from Brockway Jackson. He presented the house his wife as an anniversary gift, but used it personally as a weekend writing retreat. He made some repairs to the house and undertook to have it documented and enrolled on the National Register of Historic Places. He never reconstructed its kitchen or used it as a full-time residence. He sold the property to Wade and Carolyn Cagle in 1975.

In the 1962 general election Simpson ran unsuccessfully for a seat in the Alabama State House of Representatives on the Republican ticket. After the election he began publishing a weekly newspaper, "The Examiner" with Albert Persons, to carry the Republican message. He also financed the publication of a couple of right-wing books, including Persons' exposé of his involvement in the Bay of Pigs invasion. Over the next several years he shifted left in his politics. He participated in the Birmingham Writer's Workshop as a student and instructor, and was involved, with Virginia, in overseeing a change in the Birmingham Art Association and its association with the Birmingham Museum of Art in 1969. The issue opened a rift between Simpson and his father and half brothers.

In the late 1960s, the Simpsons moved from the former Russell Hunt residence at 2632 Mountain Brook Parkway to the former Theodore Swann residence on Redmont Road. In 1971 Simpson was dismissed from Mountain Brook's Recorders Court on the basis that he had moved out of the city. In 1974 Simpson bought Gene Crutcher Books and renamed it "Joe", for himself. The store's neon sign was later leased and reused for Rowland and Joyce Scherman's bar of the same name.

On the morning of August 31, 1977 a maid discovered that Virginia had been shot to death. Joseph was out of town. Their son, James II, known as "Popsie", was initially charged with the murder. There was testimony to the effect that he had offered large sums for his mother's death, but those witnesses were discredited in preliminary hearings and the charges were dropped.

In December of the same year, Joe Simpson was hospitalized with a ruptured stomach ulcer, and died in surgery. He is buried at Elmwood Cemetery.