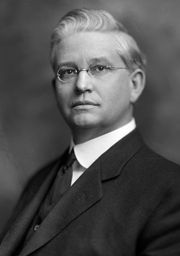 John William Abercrombie (born May 17, 1866 in St Clair County; died July 2, 1940 in Montgomery) was President of the University of Alabama and a member of the United States House of Representatives from Alabama. He was born in St Clair County, near Kellys Creek Post Office.

He attended rural schools, and ultimately graduated from Oxford College in Oxford, Alabama. He went on to receive a degree in law from the University of Alabama in 1888. He was admitted to the bar that same year and practiced in Cleburne County through 1890. He also served as a high school principal, city school superintendent, and college president from 1888 through 1898.

He was elected to the Alabama Senate from 1896 through 1898. He then served the state as the state superintendent of education from 1898 to 1902. In 1902, he was made the President of the University of Alabama.

In 1912, he was elected from the Democratic Party to the United States House of Representatives, where he served through 1917. He went on to serve as Solicitor and Acting Secretary in the United States Department of Labor from 1918 through 1920. In 1920, he was elected the Superintendent of Education in Alabama. He resided in Montgomery, Alabama, where he died in 1940. He is buried in Greenwood Cemetery in Montgomery.