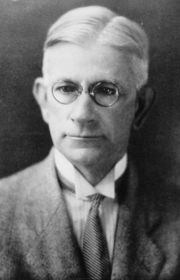 George Hutcheson "Mike" Denny II (born December 3, 1870 in Hanover County, Virginia; died April 2, 1955 in Lexington City, Virginia) was the 15th and 17th President of the University of Alabama from 1912 to 1936 and 1941 to 1942. The University's Denny Chimes and Denny Stadium (now Bryant-Denny Stadium) are named in his honor, and it was oft-repeated statement, that he wanted to make the University of "capstone of Alabama education" that gave the school that nickname.

Denny was the son of Presbyterian minister George Denny and the former Charlotte Matilda Wright of Virginia. He attended Hampden-Sydney College, earning a bachelor's degree in 1891 and a master of arts in 1892. He taught at the Pantops Academy in Charlottesville. Virginia while working toward his PhD in Latin at the University of Virginia. After graduating in 1896 he returned to Hampden-Sydney as a professor of Latin and German, and also coached the school's football team to a 2-1 record.

In 1911 Denny was offered the president of the University of Alabama, succeeding John Abercrombie. As at his earlier post, he significantly boosted enrollment (from about 400 to more than 4,800) and improved the university's finances. He recognized the value of athletics in promoting the school, recruited out-of-state students, and led a "Million Dollar Campaign" to build up the endowment with private donations, helping finance expansion projects, including a "Women's Campus" extending the university southward. During his tenure the University created its College of Commerce and College of Education, along with new programs in technical subjects and an extension program.

Denny retired in 1936 and was given the honorary title of Chancellor. He returned to Tuscaloosa in 1941 to serve as interim president for another year after Richard Foster's death. Denny was inducted into the Alabama Hall of Fame during his first term, and was honored as "First Citizen of Alabama" in 1946.

Denny and his wife, the former Jane Junklin Strickler, had three children; Frances, George III, and Margaret. He lived in Virginia during his retirement, and died from complications from a leg amputation in 1955. He was buried in Lexington City at Stonewall Jackson Memorial Cemetery.