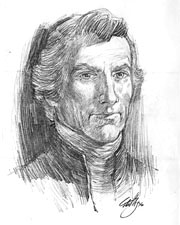 John Williams Walker (born August 12, 1783 in Amelia County, Virginia; died April 23, 1823 in Huntsville) was a politician, who served as a Democratic-Republican United States Senator. Walker was the first U.S. Senator elected by Alabama.

Walker was the son of Rev. Jeremiah Walker and Mary Jane Graves of Virginia. He was educated at the prestigious Willington Academy of Dr. Moses Waddel near Petersburg, Georgia, and received degrees in 1806 and 1809 from Princeton University. He studied law, and was admitted to the bar at Petersburg.

In 1808, Walker married Matilda Pope, daughter of LeRoy Pope and Judith Sale, and in 1810, he followed his father-in-law to settle in the new town of Huntsville, Mississippi Territory (now Alabama), and there began the practice of law.

Upon the formation of the Alabama Territory in 1817, Walker served as a representative from Madison County to the first territorial legislature in 1818. In the second session, he served as speaker. In 1819, he was president of the convention that framed Alabama's first constitution, which enabled Alabama's admission to the United States.

On October 28, 1819, Walker was elected by an almost unanimous vote of the state legislature as the first United States senator from Alabama. He served from December 14, 1819 until his resignation on December 12, 1822 on account of his failing health. He died in Huntsville on April 23, 1823, and is buried in Maple Hill Cemetery. Walker County, Alabama, established December 26, 1823, is named in his honor.