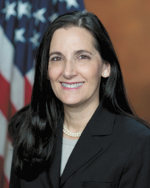 Joyce White Vance (born 1960 in Monterey Park, California) was the United States Attorney for the Northern District of Alabama from 2009 to 2017.

Vance received her bachelor's in 1982 from Bates College in Maine and her law degree in 1988 at the University of Virginia and moved to Birmingham in 1988 to marry fellow attorney Robert Vance Jr. She was an associate at Bradley, Arant, Rose & White until 1991 when she was named an assistant U.S. attorney in the criminal division, where she participated in the preliminary investigation of Eric Robert Rudolph after the 1998 abortion clinic bombing.

Vance was one of the first six nominees picked by President Barack Obama in January, 2009, and was confirmed on August 6, 2009, replacing Alice Martin. She retired in 2017 and was succeeded by Donald Trump appointee Jay Town.