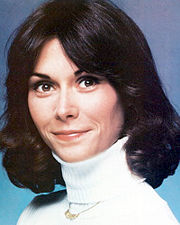 Catherine Elise "Kate" Jackson (born October 29, 1948 in Birmingham) is an actress best known for her role in the 1970s television series Charlie's Angels.

Jackson is the daughter of building supplies merchant Hogan Jackson and his wife Ruth. She grew up in Mountain Brook, was active in cheerleading at the Brooke Hill School and began her career as a model at age 16.

Jackson attended the University of Mississippi, then transferred to Birmingham-Southern College but did not graduate. She completed a summer internship at the Stowe Playhouse in Vermont and then settled in New York, enrolling at the American Academy of Dramatic Arts and working as a tour guide at NBC studios. After graduating she landed the role of Daphne Harridge on the vampire-themed soap opera Dark Shadows (1970)

After moving to Los Angeles, she took a few guest-star roles, including a recurring part on "The Jimmy Stewart Show" before accepting her second major role as Jill Danko in The Rookies (1972-76). From there she moved on to star as Sabrina Duncan in the hit show Charlie's Angels (1976-79). During this time she married fellow actor Andrew Stevens.

She was offered Meryl Streep's role in Kramer vs. Kramer, but could not accept due to her commitment to "Charlie's Angels". Hoping to launch a film career, she left the show in 1979 but was not offered any major roles in film. She divorced Stevens in 1980 and was married to editor David Greenwald from 1982 to 1984. From 1983 to 1987, she co-starred in the TV series Scarecrow and Mrs. King with Bruce Boxleitner, playing a suburban mother who was involved with a CIA-like agency. After that, she played the main role in Baby Boom, a TV version of the original movie starring Diane Keaton, but it only lasted one season. Since then, she has starred in several TV movies and has made occasional guest appearances on other shows. In 1989, she was inducted into the Alabama Walk of Fame.

In 1987 she underwent a lumpectomy, followed by a successful partial mastectomy in 1989 to remove cancerous lumps from her breast. In 1991 she entered into her third short-lived marriage with stunt performer and ski-lodge operator Tom Hart. In 1994 she underwent open-heart surgery and a year later adopted an infant son.

Kate Jackson currently lives in Keswick, Virginia and does occassional advertising and public service announcement work in between guest roles.