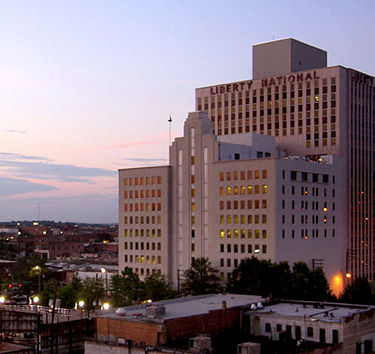 Liberty National Life Insurance Company is an insurance provider subsidiary of the Torchmark Corporation. It was the original firm, founded as the Heralds of Liberty in Birmingham in 1900, from which Torchmark emerged as a holding company in the 1970s.

In 1944, the company acquired a majority stake in Brown-Service, a Birmingham-based home service and burial insurance company, and it then purchased the Family Reserve Insurance Co. in 1950.

In the 1950s Liberty National president Frank Samford Sr commissioned Archer and Lee Lawrie to create a one-fifth size bronze replica of the Statue of Liberty for the top of the Liberty National Building on 20th Street South.

In 1960, Frank Samford Jr took over the Presidency of the company. In that decade, cancer policies were introduced. In the 1970s Liberty National acquired Globe Life and Accident and created Torchmark Corporation as a holding company.

In 1979, following the move of Blue Cross Blue Shield of Alabama to Riverchase, the city of Birmingham switched its 3.6 million dollars worth of employee health insurance plans to Liberty National.

Liberty National moved its employees to Riverchase in 2010.