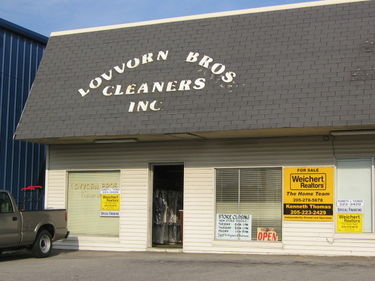 Lovvorn Brothers Cleaners was a dry cleaner located at 1828 Center Point Parkway in Center Point. At the time of its closing in 2007, it was said to be the oldest business in the town at 61 years old.

Lovvorn Brothers Cleaners was started by brothers Brooksie and James Lovvorn in 1946 after the two got out of the armed forces following World War II. Besides the two brothers, other family members such as their wives and brother-in-law, helped with the business.

In the summer of 2007, the cleaner closed for good. That July, James was living in an assisted living facility while then-85-year-old Brooksie was still working the counter, waiting for people to pick up the last of the clothes. Brooksie passed away on September 15, 2008.