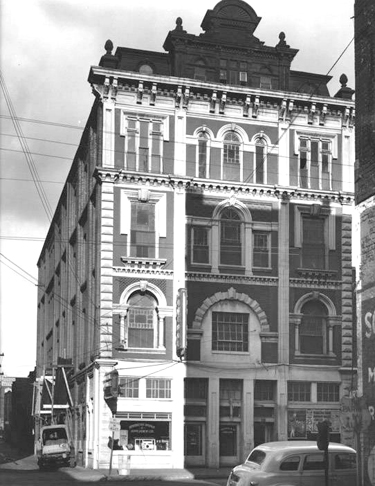 The Lunsford Hotel was a five-story brick and terra-cotta hotel constructed in 1887 by George and Susan Lunsford at 209-211 21st Street North, facing 21st Street North and adjoining 2nd Alley North. Construction of the building was financed with a $25,000 mortgage loan secured from Charles C. Harrison of Philadelphia, Pennsylvania through the Steiner Brothers Bank.

The ornate three-bay facade featured arched and Palladian windows and a deep cornice surmounted by an elaborate mansard roof. The roofline was punctuated with a sculpted penthouse dormer crowned with an arch atop the central bay. The dining room, with windows on three sides, seated 100 people. Interior parlors were furnished with Russian rugs and silk divans, and guest rooms were provided with oak and cherry furnishings. Open fireplaces and wood stoves heated the rooms, which were lit by both gas and electric fixtures.

George Lunsford died in the Summer of 1893 and his widow continued to operate the hotel with their son W. G. Lunsford. The building was used as the first home of the Birmingham Medical College at its founding in 1894. She was unable to continue paying on the mortgage, however, and Harrison began foreclosure proceedings. She filed a suit on July 28, 1895 claiming that her interest in the mortgage was solely a surety on behalf of her husband, but the courts found for the defendant and she lost ownership of the hotel. 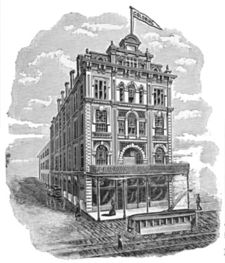 Engraved illustration of the Colonial Hotel from a 1904 booklet

In 1904 the business was called the Colonial Hotel, later New Colonial Hotel (c. 1920), and was operated by C. Bradshaw with Jesse Yeates as clerk. It advertised steam heat, an Otis elevator, and "all modern conveniences", including baths free for use by guests. In the 1930s the building was operated as the Milner Hotel with an office supply shop in the lower left corner.

Some time after the 1950s when the 12-story Jackson Building was constructed on the other side of the alley, the top three floors of the hotel were removed and the facade reclad in limestone in a clean, modern style. At one point the building housed a Dr Scholl's Foot Comfort Shop.

Former Barber Dairy president George Barber purchased the building in the 1990s. In 2009 he had it demolished and later offered ownership of the site to anyone willing to commit to relocate there from outside Birmingham.