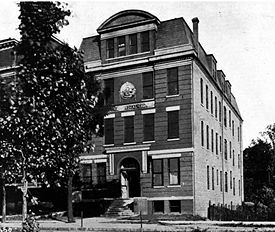 The Birmingham Medical College in 1912

The Birmingham Medical College was a medical school organized under a state charter on June 9, 1894 and operating in Birmingham until 1915.

The first classes were held on October 2, 1894 in the former Lunsford Hotel at 209-211 21st Street North. William H. Johnston was the first dean and the course of lectures required three six-month terms of study over three years. In addition to the course of lectures, students delivered recitations and received laboratory instruction in chemistry, histology, bacteriology, pathology and microscopy. The school also operated a free medical dispensary for the treatment of the "indigent poor", including a small surgical theater for clinical instruction. Additional clinical instruction was carried out at Hillman Hospital, Pratt Hospital, the Jefferson County Hospital and Alms House, and the Davis Infirmary.

Benjamin Wyman was elected dean of the school after Johnston's death in 1898. He expanded the curriculum to a four-year course conforming with the Southern Medical College Association's rules beginning the next January. The construction of St Vincent's Hospital by the Sisters of Charity in 1900 included a surgical theater for use by the Birmingham Medical College. 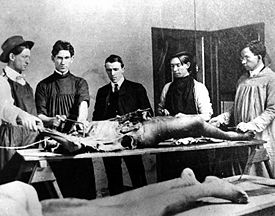 Dissection of a cadaver at Birmingham Medical College in 1904

A new facility adjacent to the new Hillman Hospital on 20th Street at Avenue F was constructed in 1902, with the cornerstone laid on July 12 of that year. The four-story brick building featured a central arched doorway and a mansard roof above its cornice with an arched dormer centered on the front facade. The college took over staffing of Hillman Hospital when its new 4-story facility opened on July 15, 1903.

By 1909 the college was showing every sign of complete success with large graduating classes who performed with distinction before the state board and went on to distinguished careers. The school boasted of its modern facilities and equipment, and of the high quality of its faculty and partner institutions, and its curriculum was approved by the American Medical College Association. That year the stockholders increased the capitalization of the college from $15,000 to $75,000.

In 1910 the college merged with the Birmingham Dental College and added a program in pharmacy. It took on the new name Birmingham Medical, Dental and Pharmaceutical College. A two story Autopsy House was constructed behind the college building.

In 1910 and 1912, however, the college received unfavorable reviews from the American Medical Association, citing deficiencies in admission standards, full-time faculty and teaching facilities. In explaining the poor showing, N. P. Colwell, secretary of the Association's Council on Medical Education, had this to say:

found at your school. We sincerely wish that some miracle might happen which would bring for you the needed ideals, the money necessary and a close union with some strong university which

would imbue you with the thorough, university methods of teaching."

The college was subsequently placed into the trust of an independent board of trustees and, on September 12 of that year the they transferred the school's land, buildings and equipment to the University of Alabama, which continued to operate the college until all of its enrollees gradated. The last class received their diplomas on May 27, 1915.