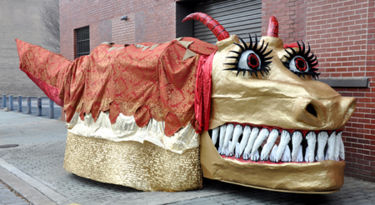 The gold-painted papier-mâché head, designed by Woodall and Gugliotto, is 8 feet tall, 6 feet long, and weighs 75 pounds. The body, designed and sewn by Hill, Gordon, Tilt and Miller, is 15-feet long and uses 28 yards of fabric. A 10-foot tail was added, along with a roller wheel for the head and a new set of thick eyelashes, in January 2013. With her tail, Madge is 31 feet long.

Vonblaere led Madge, operated by Gugliotto, Hill, Smith, Miller, Woodall and Kristin Kenning in a parade for Day of the Dead 10 at Bare Hands on November 2, 2012. The dragon was introduced to Mayor William Bell during that event. Since then she has attracted a marching band and a theme song. The troupe has participated in Magic City Dance Walk and the Mercedes Marathon kid's race.