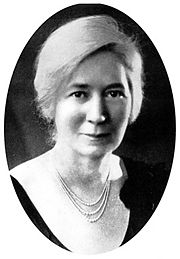 Caroline Lillian "Carrie" Hill (born 1875 in Vance; died September 24, 1957) was a notable artist and a charter member of the Birmingham Art Club.

Hill was the second of five children born to John LaFayette and Nancy Hill of Vance. She had an early appreciation for painting, and, when a train accident stranded a painter in town, she watched him intently set to work painting the scene. The next day she gathered ink and dye from the house and fashioned an artist's brush from bristles harvested from a clothes brush and set to work.

The family moved to Birmingham in 1891 and Carrie sought out the city's artists for instruction. She studied art with Rose Lewis at the Paul Hayne School and took watercolor lessons from Caroline Lovell at the Birmingham Art School on the third floor of the Loveman, Joseph, & Loeb building on 3rd Avenue North. She became a formal student of the school after graduation, trained by William Parrish in the formal academic style of painting. In 1899 she began teaching her own students at the school, which had moved to the upper floor of the Colby & Rolls art supply store on 1st Avenue North.

Rather than pursue figural paintings or portraits, Hill preferred floral subjects and landscapes, which she painted outdoors. In 1901 she and fellow artist Mrs J. B. Raulston, established a studio on the top floor of the Commercial Club Building. To supplement her income as an artist and instructor, Hill worked as a shop clerk for J. H. Roll and as a bookkeeper. As a charter member of the Birmingham Art Club, founded in 1908, Hill contributed six Florida landscapes to their inaugural exhibition.

In 1910, Mrs Oscar Underwood arranged for Hill to attend a summer art school led by Elliott Daingerfield in North Carolina. In 1912 she packed her bags for New York City and enrolled at the plein air school taught by Arthur Freedlander on Martha's Vineyard. She returned to Birmingham in 1912 and set up a studio in the Hood Building on 4th Avenue North, where, in 1913, she mounted a well-received public exhibition of her landscape studies of the Birmingham area, including many scenes of Village Creek.

In 1917 Hill moved to a suite of three rooms at the Studio Arts Building at Five Points South. Her activities with the Birmingham Art Club led her to assist in the formation of the Southern States Art League, which showed her paintings in their annual touring exhibitions. As a mature painter, she resumed studies again, under the impressionist George Elmer Browne in Provincetown, Massachusetts. In 1922 she toured France and the Mediterranean with him and other students and became infatuated with the early work of Paul Cézanne.

Hill returned to Browne's Provincetown school in 1923. One of the paintings she made that summer, "The Hillside", was admitted to the prestigious American Painters and Sculptors exhibit at the Art Institute of Chicago and was used as the cover image for the December 8, 1923 issue of The Art News. She arranged for the Birmingham Art Club to sponsor an exhibition of Browne's work at the Southern Club in 1924.

Hill toured France, Spain and Morocco again with Browne and his group in 1925, and more of Western Europe in 1927. Three of her works from the 1925 tour were included in an exhibition at Babcock Galleries in New York. Meanwhile, she continued to gather honors from other juried exhibitions and expanded her own Carrie Hill School of Art in the Studio Arts Building, teaching landscape painting and leading field trips to nearby vistas for sketching and plein air painting. She had two paintings in the Philadelphia Art Club's 1925 juried show, won a gold medal for "Little Chapel in Cahors" in the Missisippi Art Asssociation's exhibition and had another painting chosen for display at the National Academy of Design in New York. In 1928 two of her paintings were selected for the Exposition Officielle des Beaux-Arts ("Le Salon") by the Société des Artistes Français. In 1931 the Montgomery Museum of Fine Arts celebrated its first anniversary with a show of 36 works by Hill. Judson College hosted an exhibition of 40 of her paintings the following year.

A firm believer in the uplifting spiritual and aesthetic role of art in improving society, Hill donated numerous works to schools and other public institutions. Through the Birmingham Art Club, she promoted the study and exhibition of fine art and the establishment of a public collection that eventually became the basis for the Birmingham Museum of Art. As perhaps the most visible proponent of art in the city she was frequently consulted by the press for comment and her activities were frequently reported on the society pages. 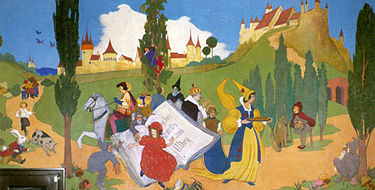 During the Great Depression, Hill was one of only four Alabama artists to receive commissions through the Public Works of Art Projects Division of the Public Works Administration. She was assigned murals for a school in Jasper and for the East Lake Library. In the library's Storybook mural, completed in 1937, she included a self-portrait in the guise of Mother Goose (wearing a pointed black hat and ruffled collar).

Hill continued to paint and teach in her later years, eventually retiring to a nursing home before she died in 1957. The "Carrie Hill Memorial Award" for landscape painting was established by the Alabama Art League in her honor.