Bare Hands (formerly Bare Hands Gallery) was a contemporary art gallery located at 109 21st Street South. It began as a commercial gallery, and was later incorporated as a non-profit with a mission to showcase contemporary Alabama artists. It closed on December 30, 2010.

The gallery was founded by Jessica Helfrecht in 1996, occupying the front third of its current space, leaving space for an apartment to the rear. In 1999 Helfrecht relocated the gallery to a bungalow at 725 29th Street South in Lakeview. A year later, she decided to sell.

Wendy Jarvis and her husband Michael Glaser consulted with each other and decided to make an offer. Jarvis took over the gallery on December 2, 2000. After a couple of years, she decided to look for a downtown space and ended up moving back into the gallery's original location - expanded to include the whole building and a narrow rear alleyway. 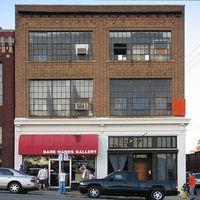 A transition to non-profit status was initiated in May 2004 and completed in 2006. Jarvis served as executive director until January 1, 2010, and was succeeded by artist Kathleen Rose-Byington. Jarvis remained artistic director, and Kim Strifert assumed the role of development director.

In addition to regular monthly exhibits of contemporary visual arts, the gallery hosted discussions, workshops, musical performances and evening yoga classes. An all-volunteer staff of 30 coordinated year-round activities. Bare Hands was featured as one of two sites in Birmingham in the National Geographic Traveler guide to the Appalachian Region. It was also selected "Best Art Center" by Birmingham magazine in 2006.

Birmingham's annual Dia de los Muertos community festival originated at Bare Hands Gallery in 2003, when artist Tracy Martin built an ofrenda (offering) for her late father, photographer Spider Martin. It has since grown into one of the city's best-loved art events, and continues under a separate board, incorporated as Day of the Dead Alabama. Jarvis retired from the executive director position in May 2015.