This article is about the choir leader and healthcare executive. For the wife of surgeon Arthur Brown see Mamie Lou Brown. 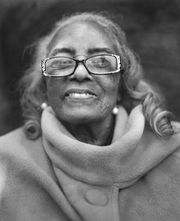 Brown graduated from Keith High School in Orrville, Dallas County and came to Birmingham to attend Booker T. Washington Business College. After graduating show took a job with the Booker T. Washington Insurance Company. She attended New Pilgrim Baptist Church and became involved in Civil Rights activism. At a weekend workshop led by Guy and Candie Carawan at Tennessee's Highlander Folk School she adapted the lyrics of the hymn "I'm on My Way to Canaanland" into the anthem "I'm on My Way to Freedomland," which was performed by Odetta at the March on Washington in August 1963.

Stirring music was a hallmark of the "mass meetings" where the Alabama Christian Movement for Human Rights (ACMHR) organized, and served to inspire and connect individuals to the movement. At Fred Shuttlesworth's requested, Brown worked with Nims Gay of 46th Street Baptist Church to establish the ACMHR Choir in July 1959. Gay brought young Carlton Reese on board, who later took over the choir as director. In addition to using music to fuel the movement, Brown participated in lunch-counter sit-ins and marched in demonstrations. She was arrested during a sit-in at Britt's Cafeteria and spent five days at the Birmingham Jail leading sing-alongs of hymns. During the May 5, 1963 march from New Pilgrim Baptist Church, Brown witnessed a firefighter refuse Bull Connor's order to turn firehoses onto demonstrators kneeling in prayer.

Brown later worked for Protective Life Insurance Company, and then moved to Los Angeles, California where she worked as a payroll clerk at Children's Hospital Los Angeles. After retiring she returned to Birmingham and worked as a healthcare consultant.

Mason died in 2020. She was survived by four siblings and several nieces and nephews. She is buried at Zion Memorial Gardens.