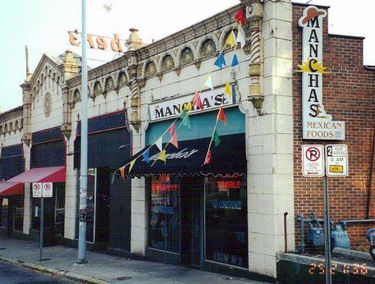 Mancha's was a Mexican restaurant located at 1207 20th Street South in the Shepherd-Sloss Building at Five Points South. It was founded about 1963 by John Mancha, the son of Bruno Mancha, a Mexican immigrant who started selling tamales from pushcarts in Birmingham in 1929.

When John died in 1975 his brother, Carl, took over the business with his wife, Rebecca. She kept it open after his death in 1992.

Though best known for its home made tamales and "killer whale" chili-topped burritos, Mancha's is also remembered for its "Wimp", "Nuclear" (jalapeño), and "Agent Orange" (habanero) hot sauces. The latter sauce was pioneered by Mancha's around 1980 after Carl first tasted a habañero in Belize. They started growing them for the restaurant before turning to local organic farmers.

The interior was decorated with trophy boar and elk heads.

Rebecca sold the restaurant in 1998. The Curry in a Hurry Indian restaurant later opened in its place.