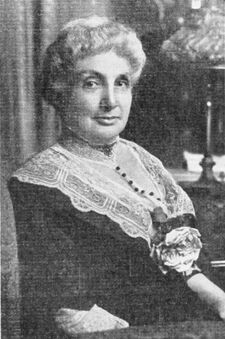 Margaret E. Ketchum Ward (born December 8, 1841 in Augusta, Georgia; died April 7, 1919 in Birmingham) was proprietor of the Relay House hotel and an influential society matron, the mother of Mayor George Ward and sometimes called the "Mother of Birmingham".

Margaret Ketchum was the only child of William Ketchum of New Jersey and Jane Griswold Demming Ketchum of Connecticut. She was a grand niece of school historian Samual "Peter Parley" Goodrich and of Connecticut governor Roger Griswold. She was also related to the earlier Roger Griswold who presided over the convention which ratified the United States constitution in 1788 and to Alexander Griswold, the first Episcopal bishop of the Eastern diocese, covering all of New England.

She attended Shorter College in Rome, Georgia before marrying George R. Ward in 1857 when she was sixteen years old. The couple accompanied her parents to Birmingham in 1872 and helped operate the Relay House, which was at the time the only hotel operating in the city and served as an important meeting place. Ward's father died in 1877 and her mother took over management of the hotel, assisted by her and her husband. Margaret became known as a well-informed, witty and wise conversationalist, a gracious hostess, and as a loyal friend. Her influence in elevating the "rough" society of Birmingham through her example was widely appreciated. She labored to help found the Cathedral Church of the Advent and remained active "in every movement of the church" for forty years.

Mrs Ward testified before the U.S. Senate Committee on Relations between Labor and Capital which met at the Relay House on November 15, 1883. In her lengthy testimony she described her observations of African American slaves and their families during her years in Georgia, her experiences during the Civil War, and also with the Reconstruction policies of the United States afterward. In concluding the session, she relished the opportunity to address Republican senators face to face and express her personal resentment at the United States having fought a war to prevent the South from seceding and then "When we got back you kept all the time dinging and dinging at us as if to make us go out again. You 'reconstructed' us as though we had never known anything at all, and as though we were indebted to the Northern people for the very first ideas of civilization."

The Wards retired when the Relay House was torn down in 1886 to make room for the new Union Depot. She was widowed in 1896.

Ward died in 1919 after a long illness and was buried at Oak Hill Cemetery. Her headstone is now located at Elmwood Cemetery.