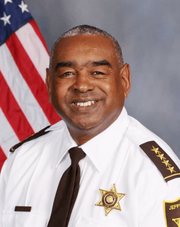 Mark Levie Pettway (born 1964 in Birmingham) is the Sheriff of Jefferson County, serving since 2018.

Pettway, the son of Ed and Camilla Satisfield Pettway, grew up in Birmingham's College Hills neighborhood and worked as a paper carrier for the Birmingham News. He attended both Birmingham and Jefferson County Schools, graduating from Ensley High School. He attended Jefferson State Community College and completed a business degree at Faulkner University.

Pettway moved to the Jefferson County Sheriff's Office in 1999. After being promoted to detective sergeant in 2008 he worked on an IRS task force and taught cyber crime and identification theft classes for the department's training academy. He is an active member of the Fraternal Order of Police.

Pettway challenged five-term incumbent Mike Hale in 2018. He won a runoff with Wilson Hale Jr in the 2018 Democratic primary, and defeated Mike Hale by a 51.5/48.5 margin in the general election. In the 2022 general election he was challenged by Republican Jared Hudson.

Pettway and his wife, Vanessa have two daughters, Markia and Gabrielle.