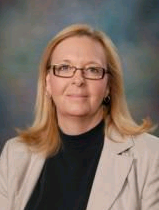 Mary Beth Blankenship was the former principal of Gardendale High School from 2016-2018.

Blankenship graduated from Cherokee Vocational High School in 1981 and attended the University of Montevallo on a basketball scholarship. She completed bachelor of science in 1985 and a master's in 1986. She began her career at Helena Elementary School that year as a physical education aide. The following year she joined the faculty of Pelham High School as a teacher and coach and has also taught at West Blocton High School and Gardendale High School.

While at Gardendale, Blankenship completed an educational specialist degree at Montevallo in 1996 and a certification in educational leadership at Samford University in 2003. She was promoted to assistant principal in 2005, then became principal of North Jefferson Middle School in Kimberly in 2008 and of Shades Valley High School in 2011.

In October 2016, Blankenship became the principal of Gardendale High School. She replaced former principal Jeff Caufield who became the Director of Human Resources at the Jefferson County Board of Education.

Blankenship retired in 2018 and moved to Savannah, GA after having spent a total of 24 years in the Jefferson County School system. The Jefferson County Board of Education approved former Assistant Principal Shelton Dukes as her successor.