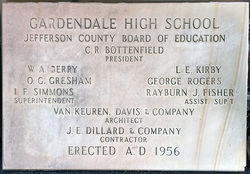 Gardendale High School is a public high school in the Jefferson County Schools system located at the corner of Main Street and Mt Olive Road in Gardendale. It is fed by students from Bragg Middle School, also in Gardendale. Enrollment in grades 9-12 for the 2013-14 school year was 1,095 students. The principal is Shelton Dukes.

The school which belongs to the Jefferson County Schools system, has been in three different buildings since its inception. The first was developed on the 45-acre site in 1956 with students in grades 7-9 coming mainly from Mortimer Jordan High School in Morris. The 17,118-square foot brick building facing Mt Olive Road was designed by Van Keuren Davis & Co. architects and constructed by J. E. Dillard & Co. Covered walkways connected three separate wings. One wing housed eight classrooms. A second held administrative offices and temporary classrooms, and the third held a "cafetorium". The cost of the initial building was $224,795. The new school opened its doors in January 1957.

A groundbreaking ceremony for the second building was held on December 15, 1964 and the building was completed on August 1, 1965.

In early 2007, plans were announced for a new school to be built with part of the county's share of the County's 1¢ sales tax for school construction. A proposal to merge Fultondale High School into the new school was rejected during planning.

On June 21, 2007 the County Board of Education contracted with Maloney Construction to demolish the old school building. The new $48 million school building was built on the north campus of the former school. It was planned for an overall enrollment of 1,200 students, with room for adding as many as 32 classrooms in the future. It has a 600-seat auditorium and 100-seat lecture theater, separate competition and practice gymnasiums. The school also has a vocational education center for use by all county high school students.

Gardendale students used the Rogers Area Vocational Center and 22 portable classrooms during the two years of construction for the new school, which opened on February 16, 2010.

Gardendale's athletic teams are called the "Rockets", a name chosen by vote of the first students during the height of the space race. The school's Driver Stadium, originally called Rocket Stadium, was the largest of any school in the county during the 1970s. It was renamed for Lawrence E. Driver (a former Alabama Power employee) who was responsible for the stadium lighting and who later became the city's parks director. The school colors are maroon, gray and white.

The Alabama Department of Education recognized Gardendale High School's Family and Consumer Sciences Education Program as the "Outstanding Program of the Year" for 2003.