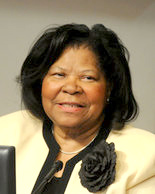 Maxine Herring Parker (born c. 1944; died November 12, 2013 in Birmingham) was an administrator at Talladega College and represented District 4 in the Birmingham City Council from 2005 until her death.

Parker attended Booker T. Washington Business College and Talladega College. She has served as president of the Collegeville neighborhood association and the North Birmingham community. Parker was also the clerk and secretary for Oak Street Baptist Church. She retired as the executive assistant to the president of Talladega college in January 2005.

On the Council Parker served as chair of the Park, Recreation, and Cultural Arts Committee and is a member of the Public Improvement committee and the Utilities committee. She earned a reputation as a humble, no-nonsense councilor, making points from the dais with an unusual economy of words and a minimum of bluster. She hosted tours of her district for other council members and also organized an annual "town hall meeting" for her constituents.

As a neighborhood officer and as a council member, Parker was a powerful advocate for her the Collegeville neighborhood. She lobbied tirelessly for help cleaning up polluted brownfield sites and improving access to the isolated community. In 2008 Parker lobbied for federal funding for a Finley Avenue flyover as part of a proposed economic stimulus bill. In 2010 she sought state funding for an overpass where 34th Street North crosses railroad tracks and a pedestrian bridge over the same tracks where they cross Fred L. Shuttlesworth Drive near Hudson K-8 School in Collegeville. The Council agreed to provide 20% matching funds for those projects in March 2010. The two projects were combined into one, later named the Council President Maxine Herring Parker Bridge, which began construction in early 2015.

Parker was re-elected in 2013 and elected as Council President when her new term began on October 22 of that year. She was admitted to Princeton Baptist Medical Center in early November and died a few days later. She was survived by a son, William Parker, who was also appointed to serve her unfilled term on the City Council. A plaque honoring Parker was added to the Birmingham Gallery of Distinguished Citizens in 2017.